​The US federal income tax system is progressive, which means that tax rates go up the greater taxable income you have.  However, there is a common misconception that a taxpayer is fully taxed at the "tax bracket" they are in.   In this short article, we'll explain how the tax brackets work so that you can see how you are actually taxed under this system.
How tax brackets work

Few taxpayers actually fall into just one tax bracket.  Instead, when referring to your tax bracket, it's the highest bracket that generally only a portion of your income is taxed.

Let's get to an example

The graph above illustrates a married couple whose taxable income put them into the 32% tax bracket.  But remember, 32% is their highest bracket--not their pure tax bracket.  In this example, these taxpayers actually pay almost no tax at the 32% rate.  Here's why:  each portion of their taxable income is taxed at the rate of 10%, 12%, 22%, 24% and a tiny portion at 32%.   In fact, in this example, a mere $50 of their income is taxed at 32%!

Breaking down the graph above

If you are visual learner, the graph above can help you quickly see how the income was taxed at each bracket.  The gray color section at the left shows the entire gross income.  The purple section shows the portion of the income that was taxed at each tax rate (10%, 12%, 22%, 24%$ and 32%).   The red section depicts the tax, and the green is the money kept.  Finally, in this example, the taxpayer had $10,000 in long-term capital gains (such as stocks).  Long-term capital gains are taxed at a separate rate, which depends on your overall Modified Adjusted Gross Income (MAGI) and how long the security was held before selling it.  in this example, 15% of the capital gains are taxed.

Let's look at the math

For those not visually inclined, below is a chart showing the calculation of the tax brackets for our same taxpayers.  Again, they have a marginal tax bracket of 32%.  But, the effective (actual) tax rate of the taxpayers in our example is only 23.2%. 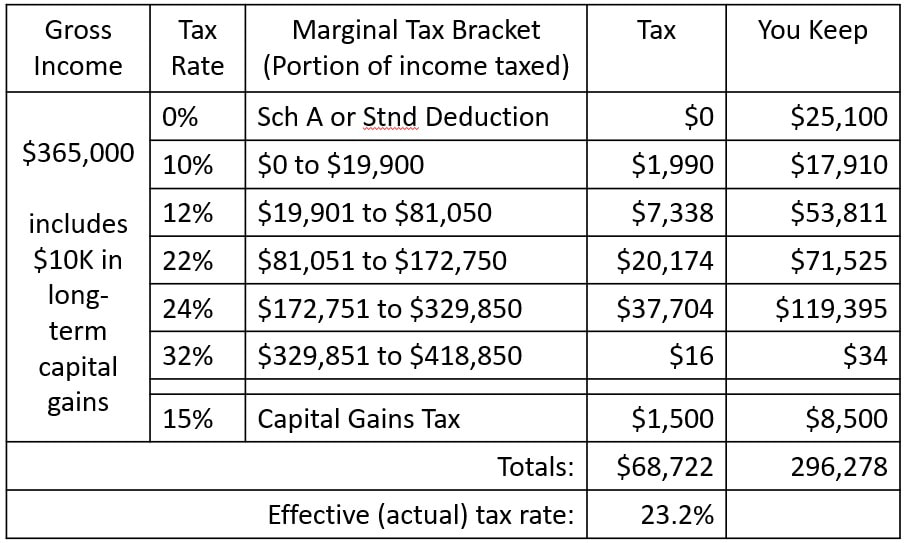 What about Capital Gains?

To encourage Americans to save and invest longer-term, capital gains held for more than one year will have a more favorable tax rates of 0%, 15% and 20%.  The rate depends on the taxpayer's MAGI (Marginal Adjusted Gross Income).

Be aware that you won't get the benefit of the long-term capital gains tax if you sell a security that you held for less than one year.    If you have short-term capital gains income, they will be taxed at your ordinary income marginal tax rate, and not at one of the more favorable rates.  For this reason, many brokers and exchange platforms will warn you that you are about to execute a short-term trade.  So, read the fine print that appears and make sure you understand  your holding period before executing the trade!

Anytime you receive a wage increase, or are contemplating a transactional event where you will make money (such as the sale of stock or property), it's always a good idea to set aside a plan to pay tax on a portion of the proceeds.

You can get an idea of your tax liability by using the free IRS online tax estimator:  apps.irs.gov/app/tax-withholding-estimator

For more complex scenarios, you can engage with us to have a tax projection.  A tax projection oftentimes entails an advance  preparation of your anticipated tax return.  Our standard billable rate applies for tax projections.  We are available to prepare tax projections between May and December each calendar year.  During the busy tax season, our availability is restricted to the preparation and delivery of prior year tax returns.   ​
© COPYRIGHT 2023 CLAEYS WOLKENS & ASSOCIATES.  ALL RIGHTS RESERVED.
Important Tax Disclosure
IRS Circular 230 Legend: Any advice contained herein was not intended or written to be used, and cannot be used, for the purpose of avoiding U.S. federal, state, or local tax payments or penalties. Unless otherwise specifically indicated, you should assume that any statement in this website or articles that relating to any U.S. federal, state, or local tax matter was written in connection with the promotion or marketing. Disclaimer: Any articles herein is designed for general information only. The information presented at this site should not be construed to be formal legal or tax advice. Each taxpayer should seek advice based on the taxpayer's particular circumstances.